Hey, welcome to the 10th episode of our book series – The Book Talk. It’s your first time here? Then check our other posts. In this episode, we’ll discuss Lean In by Sheryl Sandberg. The book explains how women unintentionally hold themselves back in their careers. It encourages women to seek challenges, take risks, and pursue their goals with gusto.

When you encounter these punchlines in the introductory chapter, you know you’re in for a thrill ride. Of the 20 odd books I’ve read in the last year, Lean In has got the most polarized reviews. While some term it as ‘THE’ book for women empowerment, others have outrightly bashed it, claiming this book is strictly for elitists.

Personally, I liked Sheryl’s narration of the struggles women undergo at work and in our society. She says the lack of women in leadership roles is the reason for gender inequality and the best way to overcome these barriers is to talk about it.

Here are two things I liked the most in Lean In:

Career progression depends upon taking risks and advocating for oneself – the traits that girls are discouraged from exhibiting. Gender stereotyping is a major contributor to this defensive mindset.

Societal pressure forces women to always keep an eye on marriage and biology demands them to think of having children at the right age. When a girl tries to lead, she is often labeled bossy. How often is a man called that? Very rarely, because it is expected of him and it does not surprise anyone.

It is important that we shy away from stereotyping genders and try to treat everyone equally, wherever appropriate.

2. Sit at the table – More than social obstacles, women face battles from within. They hold themselves back, and this internal barrier can alter their behavior.

A man attributes his success to his own qualities and skills, but a woman will often acknowledge external factors, insisting she did well because “she worked really hard”, “got lucky”, or “had help from others.” This also reflects in failures. When a man fails, he cites disinterest or lack of effort as the reason for his failure but a woman believes that it is due to her inherent lack of ability.

Women need to make this emotional and intellectual adjustment. They must change the notion that they are always headed for failure and any success is due to luck or help from others. One way to practice confidence is to fake it. ‘Fake it till you make it. Fake it till you become it.’ To grow, one has to believe in their abilities. Even when you face situations that are beyond your capabilities, keep your hand up. 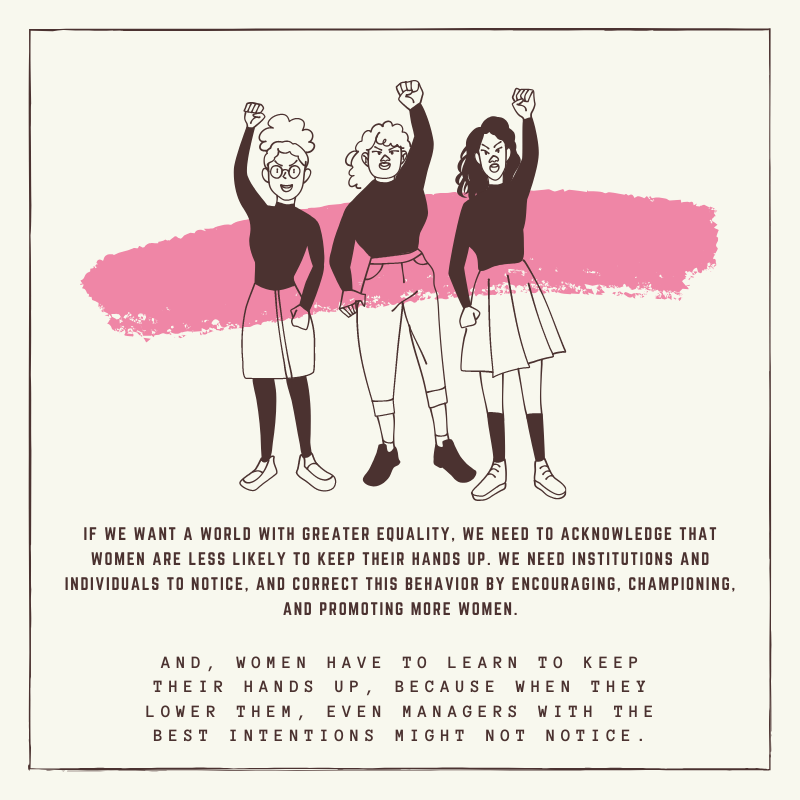 Feminism is the new F-word. Because it has been used for terrible reasons, most of us feel uncomfortable using this word. Even women deny being identified as feminists. But we should all speak up where its due. While gender may not be openly acknowledged, it still lurks below the surface.

Bringing up gender equality is awkward. Women who talk about it are sometimes made to look like they’re whining. For men, raising this subject can be even harder. But shutting down discussion would impede progress. We need to talk, listen, debate, and evolve. While being careful not to inject gender into every discussion and also not being arrogant or brash, let’s promote gender equality in our society.

If you like this book, purchase it on Amazon now! US: Amazon.com | UK: Amazon.co.uk

We hope you liked this post. What is your ONE takeaway?

Please leave your comments or send us a private message with any feedback. Your suggestions would help us write better. Follow us on Facebook and Instagram for regular updates.